Shant Manas Service users and Social workers visited Kuruvithurai and Anaipatti temple located near Solavanthan. More than 20 service users participated in the group tour. Service users found this trip relaxing and enjoyable as they have limited access to move out of their villages. Service users mixed with others well and supported each other. Shant Manas decided to take service users for outing once in 2 months. This group is supported by Mr. John Campbell. So it is called as ‘Campbell’s group’.

Pablo’s group meets at Shant Manas office once in every three weeks.  Pablo’s Group is a meeting for service users and their care takers . It is focused on boosting the self-confidence and social skills of service users. Twenty people participated in this week’s group meeting. The service users were assisted by Shant Manas Social workers and Social work student volunteers.  The service users participated in the group activities which created situations to mix with others. They did simple yoga postures and breathing exercises. All of them sang and few danced at the end of the meeting.  They expressed their willingness to attend the meeting regularly and to continue supporting each other for their well-being.

Tamilarasan, a 22 year-old-boy lives with his mom in Kamatchipuram village near Madurai. He lost his father seven years ago. His mom worked very hard in the agricultural field as a labourer to grow up Tamilarasan and his younger sister. He finished his schooling and he joined a college in Madurai for his higher studies. In the meantime, his sister quit her education and went on to work in a cotton mill to support her family.

Unfortunately, Tamilarasan developed mental illness three years ago after finishing his first year in the college. As a result, he discontinued his education. His family took him to many spiritual healers for treatment of his mental health condition. But his condition didn’t get better and his family spent a lot of money in faith healing. He became socially withdrawn and stopped interacting with others. He started to roam around even during night. He also stopped looking after himself. Sometimes he was aggressive towards his mom.

Tamilarasan’s mom had severe difficulties in managing him without any psychiatric help for the past three years. She and her daughter had to work hard to manage daily expenses of their family and to feed Tamilarasan.

Shant Manas social workers identified Tamilarasan through mental health awareness programme in Kamatchipuram village. Mental health assessment was done to Tamilarasan by Shant Manas social workers at his home with involving his mom. Later, Shant Manas Psychiatrist visited Tamilarasan’s home and met him and his mom. He was diagnosed with Schizophrenia, a severe mental health disorder. A care plan was developed by Shant Manas team to treat Tamilarasan which included regular visits to his home, talking therapy, family intervention and medication. Tamilarasan has been taking treatment for the past three months with Shant Manas and he has started to respond which is a good news. Now he comes out of his home and interacts with his neighbours. He helps his mom in performing simple tasks at home. He attends Pablo’s group meeting at Shant Manas office regularly which gives him an opportunity to mix and interact with people who have similar mental health conditions. Hopefully, Tamilarasan’s mental health will get well soon and he will either continue his education or go for an employment. Credit must go to his mother and sister and his village community for supporting him when he was unwell.

Placement student activities in SM during their Training…

September is the month when millions of Hindus all over India commemorate and celebrate Lord Ganesha’s magnanimous capacity to ‘remove all obstacles’ in one’s path. Beautiful, colourful and sanctified clay figures of Ganesha, son of Shiva, of enormous sizes, decorated with fresh flowers and festoons, are installed in public locations, street corners and open grounds for people to worship and ask for HIS benevolence in removing any obstacles in their own lives.

HE must have been casting HIS long eye on ShantManas too!. We were worried when our very talented social worker, Vigneshwaran, left us recently to further his career elsewhere. But we needn’t have. SM found, in Arun Kumar, a promising and sincere new social work recruit.
Medical cover too had been faltering lately. Dr Ganga has had to move on. However an unexpected possibility of overcoming this obstacle has appeared, literally, as it were, out of thin air. A chance meeting on the 14th with a certain Dr Fenn, a local psychiatrist of good repute, has opened another door for us!. She has offered free home visitation (along with her own qualified nurse!) to see service users, atleast once a month.


Earlier in the week there was this one-day Seminar on ‘The role of the social worker in the Indian community’ for 97 MSW students all crammed into, and overflowing, the hall at SM designed for no more than 50! And then there was this lecture to be delivered at the Madurai School of Nursing on the ‘The essentials of holistic nursing’ for around 80 general nursing students!. Fear, trepidation and exhaustion was almost palpable in the presenter, but by Lord Ganesha’s Grace the lectures went well and the feedback was good!

There is no respite here really when Bhuvaneswari (senior social worker) is around and organising things for others! She would insist its only for the good of the community! The idea was to conduct a free ‘medical camp’ in a new village that SM had adopted recently. One lone doctor, with some ‘crowd control’ help from 2 social workers and 4 MSW’s acting as ‘usherettes’, managed to survive the challenge (felt more like ordeal!) of conducting physical examinations of some 80 odd people (including a couple of very young babies and several octogenarians), and prescribing whatever required, over a 6 hr period. Being thrown in the deep end – wait for it – with your feet tied together!!. Dont ask me how I survived the week of manic madness – some mysterious benevolent forces at work perhaps? Or do your bit and get out quick?!

SM’s presence is in 8 villages now with an estimated 30k population. All current users and past ones too are well and most are fruitfully occupied and coping ok.We have been received well in the new villages.
Our MSW student placement programme is also going well and continues to be rated highly by the students.

The distances traveled by our team has increased as new villages have been added on. Travel is mainly by ‘share -auto’ (3 wheeler scooter taxi), public buses, and by foot, especially when students accompany our staff. We would love to acquire a small used Indian van sitting 7 people (of course not the enormous ‘people carrier’ of the West) for the team’s transport purposes. Perhaps Lord Ganesha will show us the way in the future!!

The work that we try to do here is only made possible with the time, support and good will of the many ‘Friends of SM’ in the UK, the US, and India.
We are most grateful for all the generous help that we receive from all of you.
Please come and be our guests when you can!

Thank you very much.
May Lord Ganesha’s Blessings be with you – always. 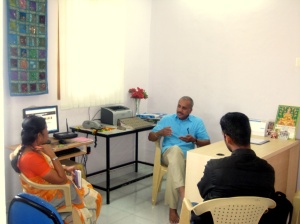 As another good year comes to an end for SM, we have seen a modest growth in its work. Our catchment population has increased to around 35k as we prepare to take our work to new villages. The year had seen the arrival of a new social worker to bolster the team and ease the case load of others. We have had valuable assistance, in the form of teaching and training, from mental health practitioners (UK) who volunteered their time and service, free of cost, for SM! And we have had great support from other visitors too. 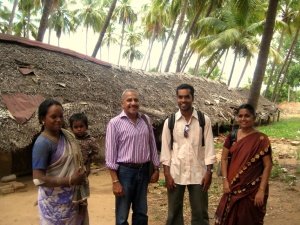 Our MSW student placement programme has seen another successful year. The interest amongst colleges to have their students placed with SM has grown with college Faculties grasping the tremendous opportunities to be had, for their students, in experiential and observational learning, especially in the areas of holistic mental and social health assessment, home treatment and rehabilitation. Another crucial factor for the attractiveness of this student placement programme has come from the positive feedback from previous students who had completed such placements with SM. These two factors combined have helped establish SM as a valuable PG student placement resource for several colleges affiliated to Madurai University. (Some interest in OT student placements from the UK too!).

Our service users , and their wider community, have also given positive feedback about the benefits that they have received from our free service through the year. (Mind, no suicides, no admissions, no incidents, and some are in paid work too!) We have been welcomed into new villages. This, I believe, is an open testament to the high regard and trust that the community holds for the work of SM. And that, in turn, is a true reflection of the wonderful professional commitment, dedication and hard work of the entire SM team. Congratulations to all of you.

All this success, of course, does bring new challenges for us – as individuals and as an organisation. We need to continue to work hard in order to maintain the trust and confidence of the people whom we serve in the community. Our work load will increase as we take on new villages. Our students and Faculties have high expectations of us. A particularly big challenge remains on the funding front. SM is rich in commitment and strong in purpose. However, it needs to raise funds urgently to bolster its resources which, I am confident, we will in 2011.

You have always asked what you could do for SM, and not the other way around! Thank you very much. And special thanks to our supporters in UK too.

Looking forward to New Year 2011 to continue the good work.